Led Replacement Bulbs for conventional filament and even CFL type lamps are becoming more common, especially as LED technology is beginning to offer almost like for like light outputs at a much lower wattage and energy saving, however this Led technology still comes at a premium cost, and even buying from the cheaper end of the Led Bulb market, a replacement Led bulb will still cost around the equivalent cost of ten conventional filament bulbs or five CFL’s. If you purchase from the high end of the Led Lamp market, then a single premium brand LED light bulb can cost anything from £15 to £30 ($25 – $45)

However, Led Bulbs are generally marketed to the consumer on their longevity, and even the cheap imported Led Lamps boast claims of lasting for around 15,000 hours, which is around fifteen times the average life of a filament lamp, and twice that of Cfl lamp. In addition to this, Led Lamps lose very little of their original brightness as they age, unlike Cfl lamps which will get dimmer and often blacken, as they age. This, in some way, justifies to the consumer the increased cost of buying the led lamp itself. But, in reality, how much of these claims are actually reality when put into everyday use?.

Well, its fair to say that the actual individual Led Chips – often used in multiples within the Led Lamp, will indeed have a long life, often well in excess of 10k or 20k hours, provided it is Electrically ‘driven’ correctly and not over-run in order to produce more light output than its design specification.

Unfortunately, the entire lamp design is only as reliable as the weakest link in its chain, and whilst the Led Chips may have a long life, there are other equally important areas of the lamp design which are just as crucial. One of these is its ‘drive’ (power supply) – a small electrical circuit which converts the voltage from the Electrical Mains, to a lower constant voltage and current which is used to run the delicate Led Chips which emit the actual light.

Unfortunately the internal electronics which run the actual Led chip(s) are often its Achilles heel and will largely be where costs are cut or inferior components are used, more especially in cheaper imported Led Lamps, often mass produced out in Asia to a strict budget of a few pennies. In the Led Lamps which I have experienced, the cause of premature lamp failure has been down to the poor design of the power supply which drives the Led’s and sadly these have all failed in a relatively short time, which resulted in the entire lamp being thrown away, long before it attained a fraction of its advertised life.

Its a shame to end this article on a negative, but unfortunately my experiences of using Led Bulbs has been wholly poor, and given the expense of these products I thought that it was only fair to share this personal experience with others, who may also be considering fitting Led Bulbs in their home, so they can see beyond the marketing and energy saving claims.

Back in 2013, I purchased four Led Replacement Bulbs from two different online retailers. The lamps I purchased were Two 7 Watt BC Led Bulbs, One SES (E14) 5.5W Led Bulb and One ES (E27) 5.5W Led Bulb, these were fitted in normal table and wall lights and used for normal household domestic use.

The first lamp to fail was the E14 5.5W lamp used in a small glass table lamp, which lasted just two weeks!.

The Second Lamp to fail was the E27 5.5W lamp used in a bedside table lamp. This lasted for 4 months before it failed

The Two BC 7W lamps are still working, but after six months they began to get so hot that the plastic begins to smell when in use, so in the interests of safety they were removed and are no longer used, although they do still light.

Both of the 5.5w led bulbs which were the first to fail (Two Weeks and four months respectively), were both purchased from “Home Led Uk” who are the Ebay trading arm of “CEDRO INTERNATIONAL TRADING Company Limited”.

Since this company sell their Led Lamp products on Ebay with”Full UK Warranty Guaranteed” I decided that I would test this Guarantee out, since their products had failed to work for more than four months. Suffice to say that at the time of posting this, they have not replied to my contact in relation to their product guarantee. Make of that what you will!. 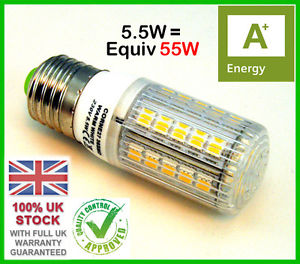 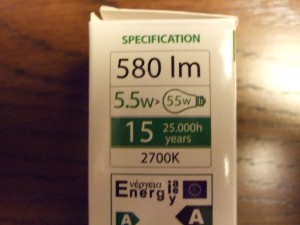 Since Home Led Uk opted not to reply and honour their warranty (despite both of their products failing to last a fraction of their claims of 25,000 hours / 15 years life), I decided to dissect one of the failed lamps myself in order to see what went wrong. You can see this article here.

But my advice is, that if you are considering the purchase of Led Replacement Bulbs, then its probably wise not to bother wasting your money because, currently both the life and the light output is something of a gamble.

The £25 which I spent on these Four Led bulbs would have bought me Sixty Filament light bulbs and around Forty Cfl lamps, and these would easily have outlasted the Led Lamps, which have now all been thrown away, within six months of purchase!.

At the time of purchasing the Led Bulbs, I also purchased a 30W Led Pir Floodlight, which I will be fitting and reviewing in an article here soon.