Why are they so expensive to run?. Should I install one? What is the best tariff?

Electric Central Heating Boilers, work in a similar way to traditional wet central heating systems fueled by mains gas, LPG or Oil. Often there are several radiators which are fed from a central heating boiler using a circulating pump, and once the heated water has been circulated through the radiators, it is returned to the boiler to be reheated.

There are two forms of Electric Central Heating Boilers, one simply heats the water and sends it directly to the radiators, and the other uses a large capacity cylinder called a heat store, and so the boiler will first heat the water contained in the heat store, where it will be stored until it is needed, just like a big immersion heater but feeding radiators, rather than taps. Usually a heat store is used where Economy 7 or Economy 10 tariffs are in operation, and so the boiler can be heated during the cheaper rate off peak period(s)

Unfortunately however, Electric Central Heating boilers cost a lot more to run than their gas or oil fired counterparts, in fact as much as three times as much in real terms when the current cost of mains gas is compared against the cost of peak rate Electricity.

Even Economy 7 or Economy 10 tariff users will find the cost of Electric Central Heating to be extremely high when compared to other forms of Electric Heating. This is largely because of the sheer amount of water needed to constantly circulate throughout the house feeding several radiators, all of which requires the electric boiler to be almost constantly consuming electricity in order to heat the return water, ready to be circulated to one or more radiators at any one time.

Inevitably, this leads to the Electric Boiler consuming electricity extending well into the more expensive peak rate periods outside of the cheaper rate E7 or E10 off peak times.  Since most households require the heating to be on during the Afternoon and throughout the Evening, hence the strong reliance on peak rate electricity to produce heat from the boiler which will become obvious upon receiving the first electricity bill after the the system has been installed. 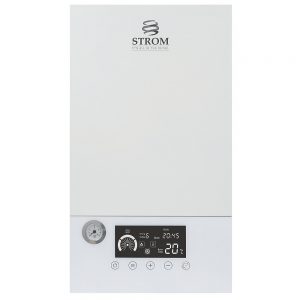 Unfortunately, even an Electric Central Heating system consisting of a 150 litre heat store, is unlikely to hold enough water, at a high enough temperature to be purely heated overnight using cheap rate electricity, ready to warm the house throughout the following day, because the losses involved when circulating water through the pipework and the surface area of several large central heating radiators will mean that the stored hot water is used up and cools very quickly and so requires reheating at regular periods throughout the day.

A standard sized Electric Central Heating Boiler is rated at around 14kw (14,000 watts), this means that it will consume around 14 units of Electricity for every hour the Electric Boiler is actually heating water.

Even with an Economy 7 tariff in operation the same example 14kw rated boiler would cost (14 units x £0.06 per kw/h ) £0.84 per hour to run overnight during the off peak rate, and (14 units x £0.15 per kw/h) £2.10 per hour during peak rate daytime periods. Also remember my earlier point that any heat store tank would not hold enough hot water to adequately supply an average household with enough hot water to heat all of the radiators in the system for the day, purely by using the cheap rate electricity and so a heavy reliance on daytime peak units sold at the higher rate should also be expected and budgeted for, especially during the cold months of mid-winter.

As you can see from the example, using Electric Central Heating works out every expensive, regardless of which tariff you are on.

Another potential drawback from using Electric Central Heating Boilers, is the actual amount of power (current) which they consume, often this will need some upgrade to be made to the incoming Electricity supply in some older properties.

Rural properties or those in remote locations and served by overhead lines may also require a larger supply transformer or a line upgrade which may work out prohibitively expensive.

If Electricity is the only form of fuel available from which to heat your property, then you may find that using conventional storage heaters on an Economy 7 tariff is more effective and cheaper than Electric Central Heating. In houses which have a very high standard of insulation, then Air Source Heating may also be a viable option of heating the building.

In addition, if your household is empty during the day, then you may actually find that using convector heaters and oil filled radiators only during the Evenings (when heat is required) is more competitive than both storage heating and Electric Central Heating boilers, and conventional heating can of course be set to warm up the room(s) prior to your return simply by using cheap plug in timers.

For all Electric Households, you may also be interested in reading about a range of modern Paraffin / Kerosene fueled portable fan heaters, designed and manufactured in Japan, which offer a safe and very cost effective form of domestic room heating compared to Electricity, and active savings of upto 50% can be made by using these heaters, compared to the high cost of running Electric Heaters.