With the increase in daytime peak rates now potentially outweighing the overnight savings, has the E7 tariff become a con?

Okay, first of all let me say that if you have any alternative to an Economy 7 then use it, and if you are thinking of renting a house with Economy 7 heating then if possible try and find an alternative property with Gas Central Heating, or at least haggle with the landlord to reduce the rent on your Economy 7 Heated property, as you will find that the Economy 7 Electricity Tariff is extremely expensive, prohibitively so for a lot of people, many of whom use Economy 7 based storage heaters.

You will probably find that Economy 7 is also next to useless at heating your home beyond 6pm or 7pm in the Evening, or even probably earlier in the day during mid winter.

Because of the cost of Economy 7, it is vital that you are on a suitable tariff, and that you are getting the most competitive tariff available for your area. The easiest way of checking this, and to save money, is to use an Energy Comparison Website

The original thinking behind the Economy 7 Tariff was a good idea, a period of seven hours of cheaper rate Electricity, to enable large Electric Heaters filled with bricks, to store heat, which would then slowly be convected from the bricks to heat the room for the remaining 17 hours that the storage heater would not be energised.

One of the major flaws in the Economy 7 idea, was that no material known to man will store enough residual heat to comfortably warm a room, several hours after it has stopped being heated, yes the room was lovely and warm when you rose in the morning, but by the time you got home from work, they were producing little more than a trickle, the room was cold and the requirement to use supplementary heating during the expensive daytime rate was required, thus negating a lot of the money saved overnight on the cheaper rate.

But this blog is all about the Con which is the Economy 7 Electricity Tariff, so I will continue

What many Economy 7 users do not realise, is that anbody on the Economy 7 tariff, is actually doing the Electricity power stations a huge favour, after all they can’t just shut or run nuclear power stations down during the early hours of the morning when demand is at its lowest, and it is impossible to store large amounts of Electricity for later use. So basically Economy 7 heating was introuduced in order to balance the national electricity load, and use up some of that excess power produced by still running Nuclear power stations, and to make the tariff and Economy 7 heating more favourable, they reduced the off peak rate, to around half of the cost of daytime electricity.

This concession worked well, and many houses during the early 1980’s were fitted with storage heaters, which ran on the Economy 7 tariff, and everybody was happy, until some years later when the Electricity companies got greedy.

Fast forward a few decades, and although the concession of Economy 7 Tariff’s still exist, it is subsidised with higher than average daytime rates for Electricity used outside of the Economy 7 overnight period – in other words, the remaining 17 hours of the 24 hour day!.

Economy 7 off peak rates originally started off at around half  of the cost of daytime peak rates, so for example, early economy 7 users, may have paid 5p per unit for their daytime Electricity, and 2.5p for their Economy 7 usage, a 50% difference.

Lets take for example, my own Economy 7 tariff rates from Npower – who are probably the most expensive Economy 7 energy provider on earth!.

That is a massive 13.51 pence difference per unit of Electricity between the Daytime Peak and Nightime Economy 7 Off Peak rates

Compare that to just 10.08 pence on Npower’s standard Go Fix 8 Tariff, for people with a one tariff meter –  so a difference of over 8p per KW/H for Economy 7 users for their daytime usage – almost double the price.

Electricity companies are also well aware that Storage Heaters on Economy 7 tariff’s in most properties are simply not able to adequately provide heat for Family use long into the Evening in the depths of winter, meaning that they know full well that their customers will have to fall back on using one or more portable Electric heaters to top up the warmth, using Electricity which costs three times more than their overnight rate, and nearly double what their non economy 7 neighbour may be paying.

Remember once again, that customers on Economy 7 are actually doing the Electricity companies a favour by using up their excess electricity produced by power stations which simply cannot be turned off when the national electricity demand drops overnight, yet despite being lulled into a false sense of security by the promise of cheaper rate overnight electricity, they are making up the difference by grossly overcharging Economy 7 customers for the remaining 17 hours of Electricity that we use, outside of the off peak period!.

How to make the most of cheaper Economy 7 periods 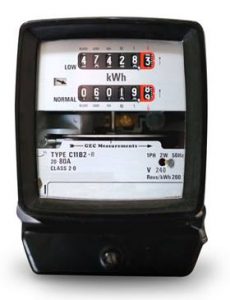 Okay, so you are stuck with an Economy 7 tariff and have to make the most of the lower rate overnight electricity. Unless you are a shift worker or work odd hours, normally you would be asleep during the traditional midnight to 7AM economy 7 cheap rate period so are unlikely to be watching TV, or playing the Xbox, and at 2AM I suppose doing the ironing is out of the question!, so how can you make the most of that economy 7 price reduction?, and actively reduce your daytime usage, when rates can double or treble!.

1) Use washing machines and tumble dryers overnight, as these use a lot of Electricity. Most modern machines have a delayed start feature which allows you to set up the machine and load it with washing and set it to switch on automatically in ‘x’ number of hours’ time.

3) If you need additional heating for when you get up, consider using a timer to switch on a Convector Heater or oil filled radiator around 30 mins to 1 hour before you are due to wake up – provided you get up during the Economy 7 period

4) Use the Electric Shower, Kettle, Toaster, Grill, Cooker etc, all during the Economy 7 period if you can. Often E7 periods run until 7.30 or 8.30AM so it should be possible to schedule a couple of E7 charged showers before work or school.

6) Always look around for the best Economy 7 tariff for your area, as rates can vary from region to region, and if you are moving into an Economy 7 property for the first time, don’t automatically assume that the previous owner had the best Economy 7 rate, use a comparison site to find the best deal.

7) If you use Storage Heaters then you need to Switch Energy Providers at least twice a year,  once in September and then again the following April. During the winter you will need to choose the supplier who offers the lowest off peak price, as your overnight usage increases considerably when you begin to rely on regular usage of your storage heating. Whilst in the spring, the opposite applies, and you need to switch to a supplier with a good daytime (peak) rate, ready for when you switch off your storage heaters during the Summer,  and your overnight energy usage, decreases.

Above all, learn how to use and set your Storage Heaters properly on the Economy 7 overnight tariff, and you can find out more about how they work and how to operate them correctly, by viewing the Storage Heater page.