Changing a Prepayment Meter to a Credit Meter

Changing a Prepayment Meter to a Credit Meter

How much does it cost? Will it save me money? Can my landlord stop me?

If you have lived in, or have recently moved into a property which has a prepayment meter then no doubt that you are finding that your energy bills are far higher than those households fitted with credit meters.

Although pressure and campaign’s several years ago on behalf of those on low incomes have removed the void between the actual energy rates charged, there are other reasons as to why consumers on prepay meters have higher annual bills than those on credit meters, the main reason for this, is that prepayment meter customers are denied the same discounts which come with payments being made by direct debit or online and which feature paperless billing.

If you are an Economy 7 customer, then having a prepayment meter is also likely to see you having a larger void between off-peak and peak rates.

Customers with prepayment meters will always pay more for their annual energy usage, largely because the methods of ‘topping up’ the card or key which feeds the meter, cost money, and those terminals which you find in newsagents. petrol stations, supermarkets and post offices, all have to be paid for, as do the staff who use them, and the network which operates them. These costs are funded from a higher rate of standing charge, which is deducted from the balance on your pre-payment meter usually on a weekly basis. 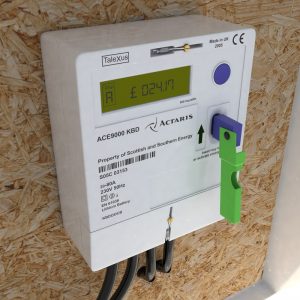 Sometimes, prepayment meters have been fitted to a property whose owner / previous owner has been in debt to the energy company for period of time. Fitting of prepayment meters in this case is often a good idea, as it removes the risk of the property owner getting into even more debt, and allows them to manage their energy usage better, whilst still paying off their existing debt in small repayments.

If you have recently moved into or are renting a property with a prepayment meter fitted, then it is very important to check that there is no debt registering on the meter, or you may end up continuing to pay back the debt that the previous occupier has accrued!. In this case, once your ownership is proven the energy company will re-issue you a new top up key / card which will clear any existing debt on the meter, and ensure that you are not paying back somebody elses debt!.

There are some occasions, where you are unlikely to be able to change an existing prepayment meter to a credit meter. Often this is where a large debt has been accrued in your name against a previously fitted credit meter, and the prepayment meter has been fitted as a result of a court order application by the energy company. Usually in these situations, it will not be possible to change the meter over until the debt is repaid, and a good credit rating be returned to the property.

If you rent a property from a landlord, and there is a prepayment meter fitted, then you will not be able to change the meter to a credit version without written permission from the landlord or property agent.

Often prepayment meters are fitted by landlords, in order to prevent bad tenants from running up large energy bills, and then skipping town when the bailiffs are called in. This leaves the landlord with the problem of removing the debt from the previous tenant, or restoring energy to the building where the supply has been cut off due to non payment. If you should change the meter from prepayment to a credit type, without permission from the landlord then you may end up being in breach of your tenancy agreement!.

If you have moved into a new property which has a prepayment meter fitted, or you are a tenant whose landlord has given permission for it to be changed, then it is possible to change the meter from a prepayment to a credit type, and pay by direct debit.

First you will need to compare energy prices for your property and enter your expected annual / monthly energy use. The quickest way to do this is to use a comparison site which quickly checks all of the different suppliers, and the available tariffs in order to find the best one for you. Once this has been done, you should find a supplier who is competitive for you, once the credit meter is fitted.

The next step, is to approach the supplier who has been the most competitive and request for them to fit a credit meter to replace the existing prepayment meter. Usually this will involve a personal credit check, but if this is your first property, then the supplier may insist that you remain on the prepayment meter for at least twelve months, in order to demonstrate that you can pay your energy bills, and are not a high risk in terms of running up a large debt with them.

If the energy supplier does agree to change the meter over, then there may be a small fee involved, usually this is around £50, however if you have done previous business with an energy supplier then it is worth highlighting this during negotiation, as energy companies can, and do often waive this £50 fee, when put under pressure by a customer.