There are so many variables when choosing Heaters For Caravans, and there are so many caravan heaters to choose from, ranging from Gas fired heaters and more conventional portable electric heaters, and now a new range of blown air and radiant portable Japanese Paraffin Heaters.

One aspect to bear in mind when choosing a portable electric heater for use in a caravan, is the electricity wattage loading of the heater, and the rating of the hook up on a pitch. Many touring caravan and camping sites have electricity hook ups rated at 10 Amps, however there are also a growing number of sites which may limit the Electricity loading per van to as little as 6 Amps (this type of limitation is especially more likely if the Electricity from the pitch hook up is free).

Even some Static Caravan sites with metered electricity will limit each pitch to 16 amps or 20 Amps, which may sound reasonable, until you realise that a 3kw fan heater or convector heater has a loading of nearly 13 Amps all by itself. Which means that just by running a Convector Heater and Electric Kettle together will immediately trip the supply. So great care needs to be made when considering portable electric heaters for use in a caravan.

One advantage of portable caravan electric heaters, is that they are usually a safe form of heating, they have no naked flames, no fumes and no gasses, electricity is also 100% efficient, so every penny you put into the electricity meter, is converted to heat, with no conversion losses, unlike traditional Gas or LPG heating where a lot of the heat (upto 55%) escapes up a flue. In real terms, modern Electric Heaters will cost upto 25% less to run, than conventional bottled LPG fires.

Electric Heaters, also tend to be portable and take up little space, which makes them the first choice for touring caravan users or those with small van conversions, and the problem of limited space in which to stow a heater. 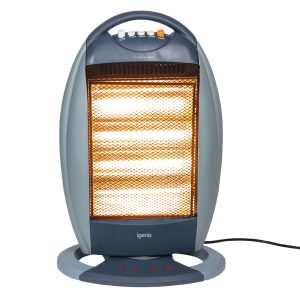 If you are using a ‘summer’ type of Caravan with little or no insulation, then you would usually find yourself wasting money whilst effectively trying to heat the outside air, with most of the heat escaping through the roof, glazing and panels. In this type of caravan the use of a quartz halogen heater is recommended, as these are designed to concentrate on heating people directly, rather than the actual air in the van. Quartz Halogen Heaters are the smaller, domestic versions of the heaters used in smoking areas in pub beer gardens and patio heaters, and are ideal for poorly insulated caravans, and even under awnings, as they are designed to heat people directly, and so very little heat is produced and then immediately lost through the fabric of the van itself. The only negative is that they have to be positioned close to people, and directed at them in order to be effective.

You can find two types of Halogen Heater, one is a 4 ‘bar’ type which has four heat settings, usually 400w, 800w, 1200w and 1600w and you can switch between 1 – 4 bars. The second type is a two bar halogen heater, which is often smaller and more portable, and has 400w and 800w heat settings. Both heaters are suitable for 6A and 10A electricity hook ups, although care should be exercised when using heaters with other appliances, so that the maximum demand is not exceeded for the pitch. 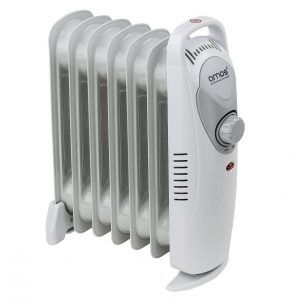 Other forms of portable Electric Caravan Heaters, include Mini oil filled radiators, once again these range in wattage ratings of between 600w and 1500w depending on the size. The smaller 600w types are ideal for background heating only, or to run overnight, and are only really suitable for keeping the chill off a small, closed sleeping area. A 1000w Oil Filled Radiator is perfect for keeping a family sized van at a comfortable temperature during the cooler Evenings in Autumn and Spring, whilst the larger 1000w Oil filled Radiator will be needed to fully heat a caravan during occupation in the Winter months and will still work on a standard hook up, but the 1500w version may prove to be expensive to run if you are paying metered units at the site, although this will still be around 20% cheaper than a similar sized LPG heater. 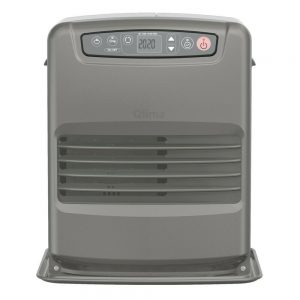 A newer form of Heater is also on the market. Called a Paraffin Inverter Heater it is fueled by Paraffin / Kerosene, which tends to work out much cheaper than Electricity and LPG for blown air heating, although the actual outlay for the heater itself is a lot more than a portable electric heater it will pay for itself very quickly. The Paraffin Inverter heater works out a lot cheaper to run than either an LPG Gas heater or blown air and three times less than hook up electricity, it is also more efficient than all gas or LPG heaters, being 99% efficient, compared to just 50% to 70% efficiency of the average LPG fueled caravan heater. The inverter heater also requires no safety checks or expensive maintenance and can be serviced by the owner perfectly legally and cheaply.

Two types of Paraffin Inverter Heater are available, a fan assisted version which requires an Electricity supply and works like a fan heater, as it uses an electric fan to blow the heat out of the heater. However the fan draws very little current in operation (around 16 – 22 watts) so it could easily be run for a few days from a suitably sized 12v-240v Mains Inverter connected to a 12v leisure battery or a typical Electricity Hook Up.

If no Electricity Supply is available then there are modern wick based heaters which produce radiant heat, and work like a traditional electric or gas fire, but require no electricity as it uses a wick based system and runs from Paraffin / Kerosene. Both types are very economical and thanks to modern Japanese safety features – no external flue is required and they remain very safe, and unlike the older paraffin heaters and LPG bottled fires, they don’t emit any moisture or fumes and will not cause condensation or damp problems with long term use. Whilst these heaters recommend the use of expensive pre-packaged odourless paraffin the Electronic Inverter Heater version is wickless and seems to happily work on cheap domestic home heating oil (28 second Kerosene) and several readers have commented their success in doing so.

Paraffin Inverter Heaters cost around 60% less to run than the equivalent externally flued LPG gas fire or warm air heating, and 45% less than the metered Electricity from site hook ups, making them the cheaper option for those who use their vans on a regular basis or who tour during colder months, and enabling the heater to pay for itself from the savings they make in energy or fuel very quickly.

2 Responses to Heaters For Caravans