With the growth of LED Light Bulbs and Lamps rapidly replacing the old style wasteful filament lamps and even Compact Fluorescent Lamps (CFL’s) problems are now beginning to emerge in relation to using LED Lights and Lamps in light fittings which are controlled by Dimmer Switches and there is also a lot of confusion and misinformation in relation to the subject of Dimmer compatible LED Light Bulbs used with the Dimmer Switches often already fitted in the home.

First of all, whilst it is possible to use a Dimmer compatible LED Light Bulb with a conventional dimmer switch originally fitted to control filament lamps and that initially it will probably seem to work fine, it will not be free of problems, and in the longer term, you will also be taking the risk of causing premature failure of the LED Light Bulb, and even the dimmer switch itself.

The reason for this is fairly simple and is down to the actual design of the traditional filament lamp dimmer switch. Lets take a look at the back of a typical domestic dimmer switch, the type which is already fitted to most houses at some point over the last 25 years, and originally designed for a filament load. 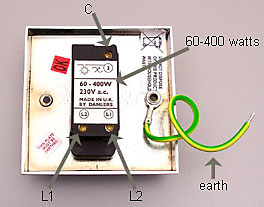 Electrical loads are measured in Watts or (w) for short and this rating label tells us that the dimmer switch in the picture will work with connected lamp loads of between 60 Watts and 400 Watts. Whilst the maximum load of 400 Watts is important to prevent damage by overload and overheating, the minimum load of 60 Watts is also equally important as it shows the minimum load that should be connected to the dimmer switch to ensure correct operation.

This is where the problem of using an original filament lamp dimmer switch begins. Many years ago, domestic filament lamps were rated at 40w, 60w, and 100w so it was easy to match that 40w or 60w minimum load that the dimmer switch required, using just one lamp. However these days, LED Lamps consume very little Electricity and have a very low power consumption, some as low as 3w, 4w or 6 w each. So in order to meet the 60W minimum load that the Dimmer Switch requires for correct and safe operation it would require at least ten 6w LED lamps to be connected to it. Far more lamps than most rooms would need.

So by exchanging filament for LED bulbs even in 2, 3 or 4 lamp fittings you may only be connecting a total load of 10w, 20w or 30w to a dimmer designed to work with lamps rated at 40w or 60w and above. Whilst this is good news for saving energy and reducing your Electricity bill, it isn’t good news for the dimmer switch.

If the Dimmer Switch is connected to a minimum load which is below its design capabilities, then it can become unstable, the effects of this may immediately be noticeable by a flickering of the lamp(s) or the loss of the full 0% – 100% dimming range, the dimmer switch may buzz and interference may be heard on FM radio and Wi-fi systems. Sometimes the effects cause by the wattage mismatch may not be immediately noticeable, but the LED Lamp and its internal power supply will still be under stress, which will eventually cause it to fail prematurely. If you find that you already have LED Light Bulbs which fail frequently on a dimmer switch, then the chances are that they are failing because it is not a correct type of dimmer for the lamp.

So not only do you need an LED Light Bulb which is compatible with dimmer switches, but you also need the correct type of modern Dimmer Switch which is designed to be used with LED lamps. This Dimmer is called a Trailing Edge Dimmer Switch, and this will work with very low wattage loads, some down to as little as 8w or 10w. Often this will mean replacing the old dimmer switches with a Trailing edge dimmer when LED lamps are fitted. Not doing so, is false economy.

Not only are trailing edge dimmers designed for LED’s and work down to much lower wattage loads, but they also feature soft start technology, this is where the start up voltage is applied slowly, LED Lamps don’t like surges and many fail when they are switched on because a conventional dimmer or switch doesn’t have the Soft Start circuitry.

So to sum up this article in one statement, if you are wanting to fit LED Light Bulbs to your home, make sure that the ones which are to be controlled by Dimmer Switches are Dimmable by design (usually stated on the lamp packaging( and you have the correct compatible Trailing Edge Dimmer Switch fitted.

If this advice is followed, then there is no reason why, you cannot enjoy the savings offered by changing to LED Light Bulbs whilst still continuing to enjoy the flexibility of a dimmer switch.