How to service a Corona Inverter Heater

Having problems with your Corona Inverter Heater?.  Are you plagued with ongoing intermittent E4 and E1 Error Codes?. Well, the chances are that you need to service your Corona Inverter Heater and give it a good cleaning. Taking it to a Corona Distributor can be both time consuming and costly, and in some locations there are just no distributors who are interested in offering servicing to these heaters, so why not carry out the servicing yourself?.

Here we provided a step by step guide (complete with pictures & video) on how to strip down and service your own Corona Inverter Heater. As usual common sense safety rules apply, in other words whilst its perfectly legal (at least in the UK) to undertake this work for yourself, make sure that you are both confident and competent enough to follow this guide, if not then its probably better to leave it to a professional or check a community social media page for a local handyman willing to undertake the work.

However most competent handymen and DIY’ers who are capable of putting up a shelf or assembling flat pack furniture should be able to service their own Corona Heater for nothing more than an hour or two of their time, when following this step by step guide.

For those who require a little more detail, there is also a 1hr and 30 minute video which can be found the bottom of this page

Top Tip:- It often helps to take photos of your own along the way, using a camera or phone as you carry out the disassembly, especially if you choose to disconnect any wiring or piping to give easier access, this way, if you run into problems during the re-assembly then you can refer to the photos.

First of all, here are the tools that you will need:-

So lets get started. Sorry about the quality of the photos, but they were taken several years ago, using a low-res camera phone.

1) First of all, remove the screws holding together the front cover and hot air outlet grill. On some Corona Inverter heaters, the front cover and outlet grill are one part, with fixing screws on the sides. However, on other models (such as the Corona 3016) the cover and grill are two individual parts, each secured with two fixing screws. The main front cover screws on these models are located on each side, at the bottom of the panel, whilst the grill screws are located at each side and can be accessed once the main cover is removed. The following photo shows the one part cover, with side fixing screws. 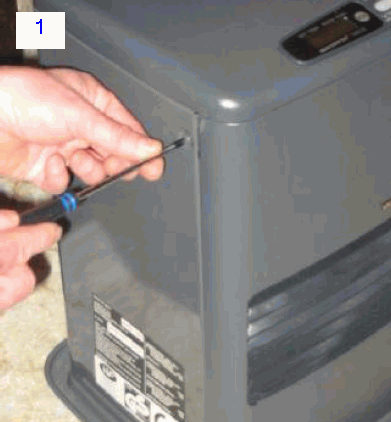 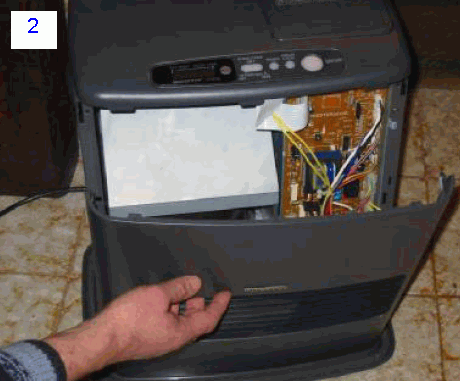 Turn the heater around, and remove the four screws which secure the combined rear convection grill and fan assembly. Once the screws are removed, lift the panel up slightly to unhook it from its mounting grooves, and gently place it on the floor. Note that the actual fan, and its wiring also come away with the panel, so care should be taken not to stretch or damage the wiring or fan blades. 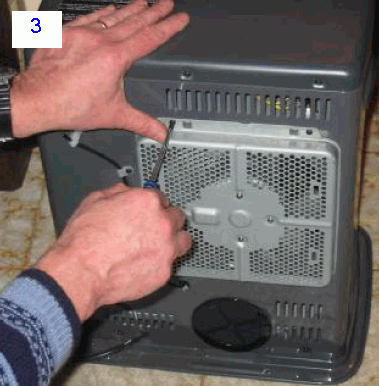 Next, locate the small electronic fuel pump which is found to the bottom right, under the control pcb. Using pliers, loosen and remove the pipe housing connector from the top of the pump. Once undone, the copper fuel pipe simply lifts out of the pump outlet nozzle. 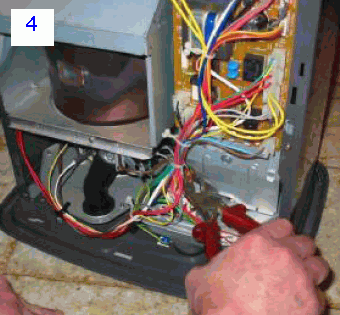 Remove the single screw from the bracket mounting which holds the copper fuel feed pipe. 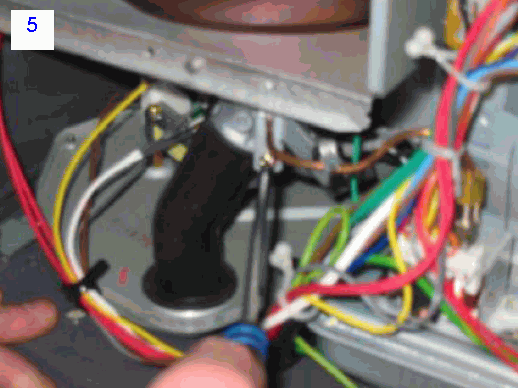 Return to the rear panel, and behind the previously removed fan assembly, are four additional screws. These hold in place, the main grey metal enclosure containing the burner. 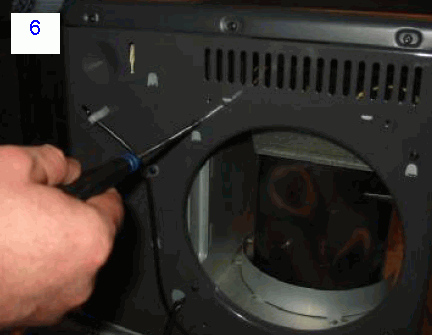 Remove the rubber air pipe, which connects to the lower combustion fan unit in order to supply air to the burner. 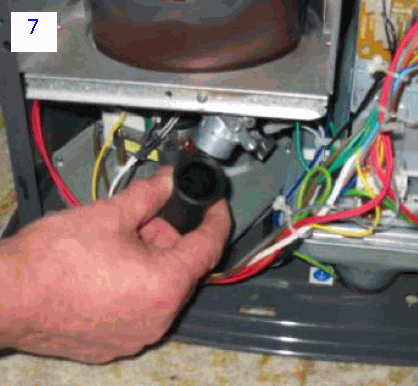 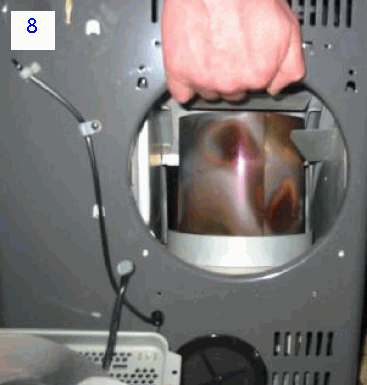 Disconnect, the two yellow wires which are fixed to the thermal switch on top of the grey metal enclosure, you may also find it a little easier to undo some of the plastic wiring loom clips to allow a little more flexibility in the cables running to the enclosure. Next remove the  side screws which hold the metal enclosure together in order to access the main atomization (burn) chamber, 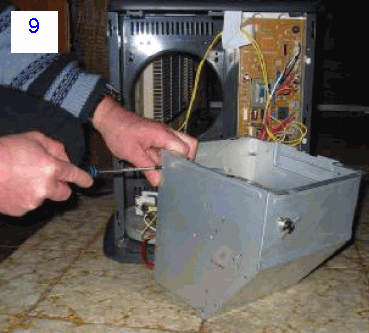 Once the metal sides of the enclosure are removed, you will now be able to see and access the main burn chamber. On some models you will now also need to remove the round metal top on the burn chamber. To do this, pull up the two metal tab ‘ears’ which are folded down, and straighten them upwards, the top should now pull upwards over the tabs and you can remove it.

Using a long screwdriver, undo and remove the three screws which hold the burner plates onto the atomizer. There are two parts to this burner, which should just lift out, however be careful of the bottom part, which has a very thin, delicate gasket underneath it. 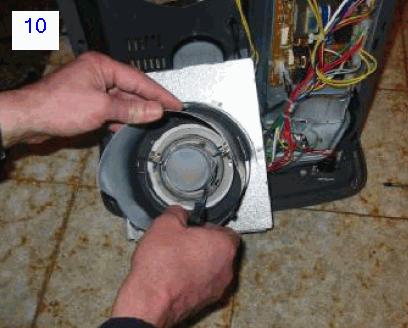 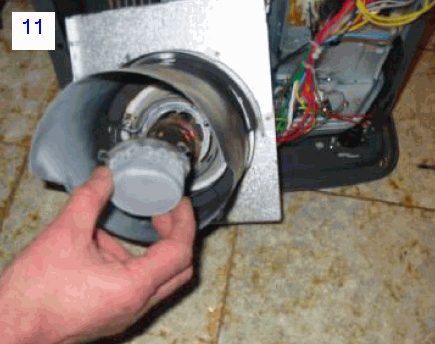 Give the two parts a very good clean in order to remove all of the carbon deposits. First I soaked them for several minutes in a mixture of hot water and dish detergent, and then used some foaming Oven Cleaner (Mr Muscle Brand in the UK) and an old toothbrush to completely scrub the mesh clean. Wear gloves at this point as not only is it a dirty job, but oven cleaner is caustic and can cause skin burns. Rinse completely after cleaning and allow to dry.

Inside the burn chamber, there are two small metal rods. One of these is connected by a thick wire and is the igniter and generally requires no cleaning. However there is also another curved metal rod at the opposite side to the igniter, which is the flame rod (Flame Detector or FLOD). This is effectively a sensor which sits in the flame in order to sense that the heater has successfully lit and monitor the flame and so over time can also quickly get covered in carbon which changes its Electronic Resistance and will eventually lead to the heater incorrectly thinking that the flame is not longer present – shutting down with ‘E1’ or ‘F1’ error codes.

Remove the flame rod, by firstly disconnecting the wire attached underneath, and then remove the single screw holding the rod bracket in place inside the chamber. It may be useful to take a photo at this point showing the exact original position of the flame rod, so it can be refitted in the same position.

Pull the flame rod out, and also scrub it with oven cleaner. Next use some wire wool or fine grit sandpaper and gently remove any remaining stubborn soot and carbon deposits and return the rod back to as much bare metal as is possible without damaging the surface. Rinse in cold water, dry and refit the flame rod back into the chamber – maintaining its original position.

Finally, give the burn chamber a good clean out with a vacuum cleaner. Whilst you have the Combustion Chamber apart, its also worth checking the bowl under the burner to check for rust / muck build up. The image below was emailed to us by “Mister B” and shows large amounts of build up, which caused combustion errors, eventually leading to the heater continuously shutting down. Using Dipetane Additive at the dose of 10 ml to every 4 Litres of heating oil should reduce the amount of this Carbon build up 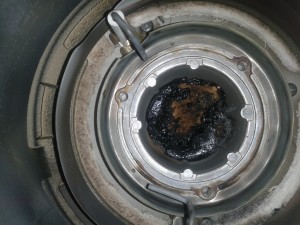 Once everything has been cleaned and allowed to dry, carefully Re-assemble the heater, test and enjoy your newly serviced Corona Inverter Heater!.

I would also recommend (if you are not doing so already) that you filter any fuel (regardless of premium C1 paraffin or heating oil / kerosene) through a “Mr Funnel” filter in order to remove any water / dirt contamination and help to minimise future issues.

I’ve also recently (2019) found a fuel additive called Dipetane which seems to help reduce the amount of carbon build up in the combustion chamber when added at the dose of 10ml to every 4 litres of fuel, and so should help prevent a return of the error in the future. (Although annual checking & servicing should still be maintained).

For those who require a little more information and a better, more informative guide, there is a video below which shows the entire procedure. Thanks to Jon Porter for providing the Video link, and to “Porky Wizard” for producing the detailed 90 minute video!

If you are still encountering “E” or “F” based errors on your inverter heater, even after following the guide above, then its probably time to replace the flame rod with a new part. Alternative, a work around exists which restores the functionality of the existing Flame Rod and is described in the following video.

102 Responses to How to service a Corona Inverter Heater