Is it possible for a tiny lithium battery pack to start a diesel car?

There is nothing worse than getting into your car and finding that you have a flat battery, which always seems to happen in the middle of Winter when you are running late for work, or have to make an appointment somewhere.

Yes, you could charge the car battery up, but that would mean running an extension cable from the house / garage,  searching for the Battery Charger, and then waiting for two or three hours for the battery to gain enough charge to crank over the engine. Then you would probably find the Battery flat again, when you left your destination, and that would be a call to your motor breakdown company.

Wouldn’t it be far easier to jump start the car in less than one minute by using another battery, but without the hassle of jumper cables and having to connect to the battery of another vehicle?

An increasing number of Motorists have started carrying Car Battery Jump Starters around with them, these are portable devices which consist of a pair of jump leads connected to a 12v lead acid battery. Often these Starter Packs, consist of a tyre compressor and various warning lights which tend to make them bulky, taking up valuable room inside the vehicle or its boot (Trunk) space.

Using a sealed lead acid battery, means that they lose charge when just sitting around in the car, waiting to be used, this means that you need to periodically charge them up every 3 months or so, otherwise the one time you need it, then it will be as flat as the car battery you are trying to start.

But now there is a different Car Battery Jump Starter on the market, and one which replaces the conventional lead acid battery used in the earlier, traditional jump starter packs. This technology is called Lithium Polymer or ‘Lipo’ for short, this is the same Lithium technology as is used in the Batteries used in Electric Cars, such as the BMW i8 and Tesla.

The advantage of this type of battery is that it is powerful and lightweight, and also will hold its charge for around 12 months, only losing 20% – 25% of its charge during the period, meaning that it will start an average car two or three times, despite being stored and not charged for a year. 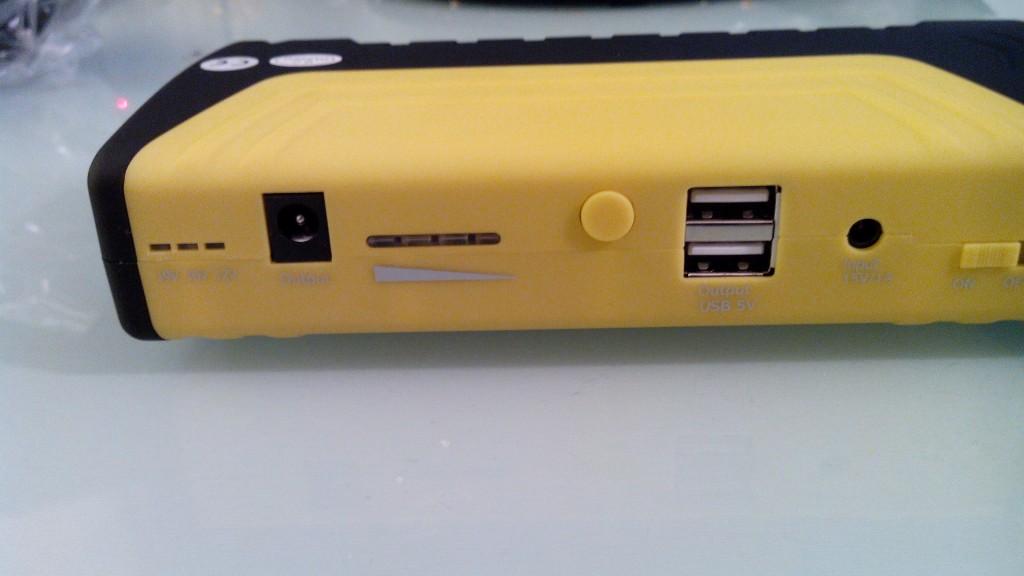 When you look at the Jump Starter Pack, its hard to believe that this small plastic cased unit will be enough to start a car, especially as the one i’m reviewing is designed to start both Petrol and Diesel engines in cars and vans upto 3 litres in size. In fact the cost difference between the Petrol only and the uprated high power Diesel and Petrol Jumper Packs that i’ve reviewed here is so small, that its worth going for this increased capacity version every time. 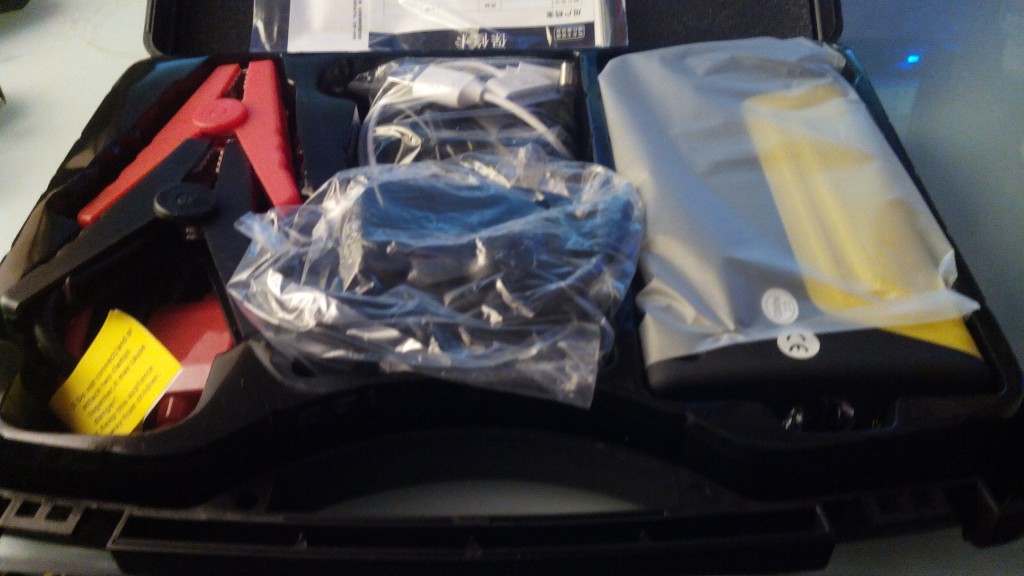 Unfortunately the Chinese manufacturers always exaggerate the ratings of anything containing a battery, so the 50,800 MAh rating printed on the case and unit itself should be taken with a huge pinch of salt, in reality I would estimate the capacity of the built in battery to be between 2200 mah and 3000 mah, however even with the more modest and accurate rating it is still more than fit for the purpose it is designed for.

In fact during testing, I managed to start a 2.0 Diesel car four times in a row, with only a 25% reduction in the battery capacity (according to the built in battery level meter), so I estimate that you would get at least ten cold Engine starts between charges from this pack.

The unit does lack a Tyre Compressor, but with the increase in popularity of Run Flat Tyres or dealer supplied compressor pack and tyre foam cans supplied with newer Vehicles already, then I would be surprised if the feature was missed.

A wide and comprehensive selection of jack and phone charging leads and adaptors are also supplied in the Kit.

When the unit needs charging, it can be done either by using the supplied UK mains adaptor, or the 12v car cigar lighter charging lead which is also supplied, to charge to 100% takes between 5 and 10 hours, depending on the level of the battery and the method used, however the unit will crank and start a car with as little as 25% battery capacity.

The photo of the Jump Starter Pack below shows the front panel, which contains the On / Off switch (This controls power to the USB Charging Sockets and the Built in DC Accessory Jack).

The four blue leds indicate the remaining battery capacity in 25%, 50%, 75% and 100% increments, and as you can see, I had recently cranked a diesel car four times in a row in order to test the unit , and there is still 75% capacity remaining.  The three blue LED’s to the far left, indicate the user selected voltage appearing on the DC accessory jack, which are 12v, 16v and 19v and can be used to power accessories or charge laptops. 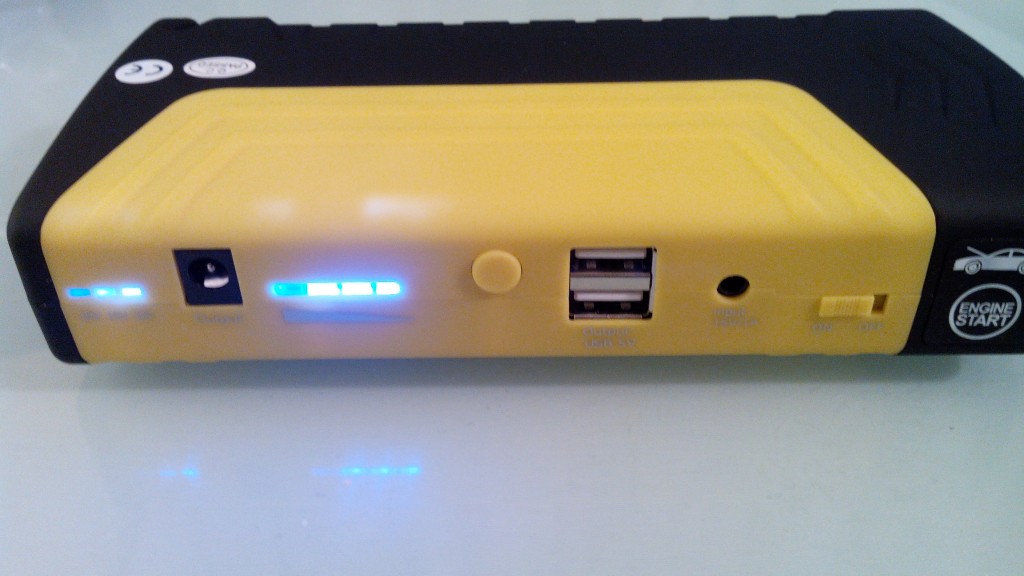 Below we see the Jumper Pack with the supplied jumper cable crocodile clips, plugged into the socket at the far right of the unit. The leads are fairly short but the unit is able to sit happily on the top of the car battery, or slide down the side. The red box you see on the red cable contains the protection diode and circuitry to protect the unit from reverse current.

The starter output is rated at 200A continuous, 400A peak, which is more than enough to start a petrol or diesel car / van with an engine capacity of up to 3.0 Litres, and it started by 2.0 litre diesel from cold during the winter months with ease. 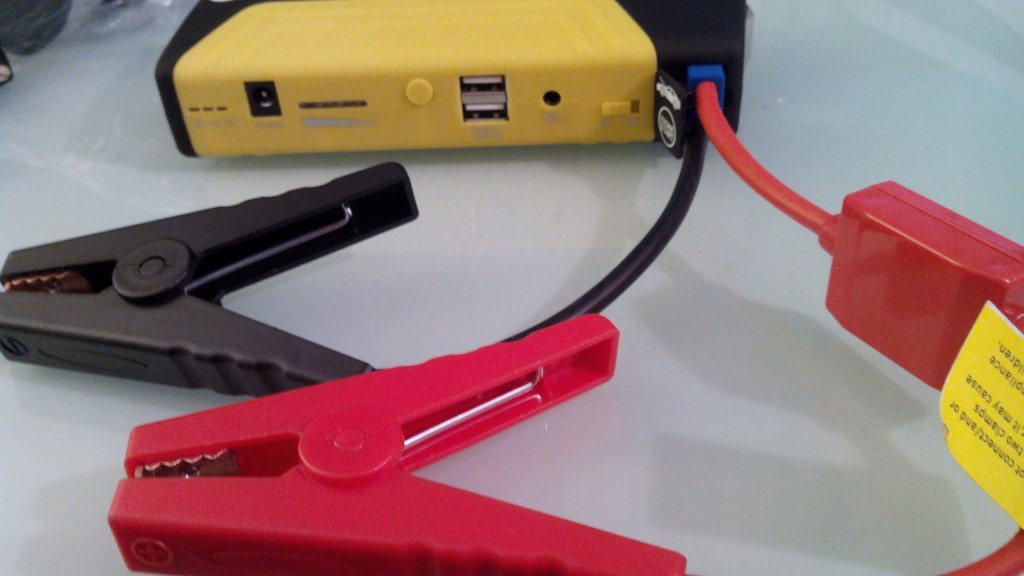 The Unit has a powerful built in LED Torch, with different modes of operation. It can be set to give a steady light as a torch or worklight, or to flash a warning or flash in an S-O-S morse code format. The Torch is very bright for its size and I ran it in Continuous mode for 4 hours with no drop in Battery capacity. 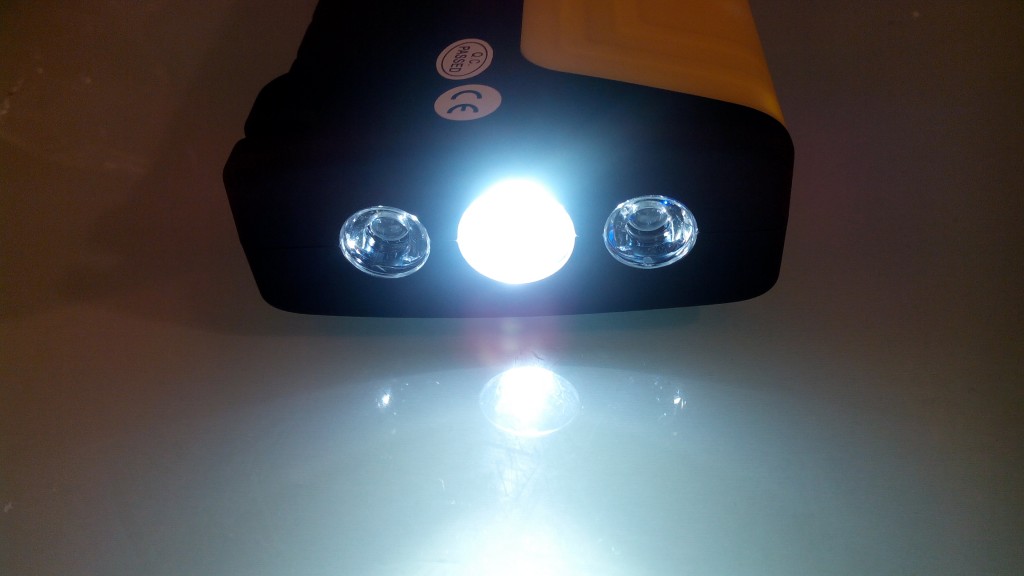 The Car Starter Booster pack will be a useful addition to any vehicle, for drivers young and old alike, and will essentially pay for itself in convenience, the first time it is not used – either to Jump Start a vehicle with a flat battery, but also for those times when a phone, laptop or tablet needs to be charged or there is no mains supply available, or someone has forgotten to pack their charger!.

The Car Battery Booster Pack featured in the review is available for delivery for around £40 from Here, which is roughly the same price as its Lead Acid equivalents, but with the new Lithium Technology it is around 1/3 of the size, about 6kg lighter and only requires a top up charge every 9 – 12 months!.

The internal battery can be charged for 3000 cycles, which is also around 1000 more than the traditional Jump Start packs.