GB Energy, one of the smaller energy companies in the UK, has recently caused great controversy amongst it’s customers, by increasing their Gas and Electricity prices by over 33%.

Their Electricity tariff, for example, will be increasing from 10.24p to a whopping 13.59p per kw/h from Nov 13th 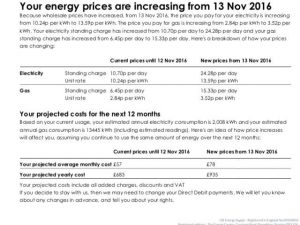 This hike, in addition to the doubling of their standing charge, is not only an unpopular move for the Energy Company but is now very unlikely to make GB Energy an attractive option for most people, which has led to many existing GB Energy customers, flooding the consumer forums and GB Energy Social networking pages, stating their intention to leave GB Energy.

However more alarmingly, many GB Energy customers report that they have amassed a significant amount of credit during their time as a GB Energy Customer, and now they are finding it very difficult to obtain refunds from GB Energy once they have changed energy supplier, with one customer alleging that they had now been waiting for a refund of their credit balance for almost two months.

Reports on the GB Energy Facebook page, also seem to indicate that customers are finding it very difficult to even contact somebody within GB Energy, not only in response to the round of price increases, but also in relation to normal customer services.

Are you a GB Energy customer struggling to get a refund of the credit that you are owed?, follow my step by step guide to getting a timely refund, when usual methods of requesting a refund have failed.

3.  If the refund is not made within 14 days, start a small claims procedure using      https://www.moneyclaim.gov.uk

Don’t bother threatening GB Energy or indeed any Energy Company with the Ombudsman, they hear this hundreds of times a day from customers who scream it down the phone at them as if its some kind of magic solution, but unfortunately such threats are generally hollow and are treated as such, so it simply doesn’t have the shock and awe affect it may have had fifteen years ago, and you are more likely to be quietly laughed at behind the scenes rather than having your complaint escalated.

The Energy companies know full well that you have to give them eight weeks after your written complaint is sent to their head office, before the Ombudsman will even look at your complaint and even if they do, they will give them further time to reach a satisfactory resolution by which time the customer has probably given up / forgotten about it. If you are owed money the solution is simple, take a small claims action against the energy company who owe you money, far faster than the Ombudsman, plus the Energy Company is far likely to take it more seriously given the effort you have already gone to, and the fact that they don’t want problems with the Courts.

Here are some recent GB Energy Customer posts from their own facebook page.

Jim Rebbeck Currently trying to get my money back where I was overcharged and GB energy insists on only crediting back anything over 2 monthly payments, if you pay £100 per month and you are in credit £240 you will only receive £40 back and may reduce your monthly direct debit by a few quid while you are still a customer, I have left gb energy over a month ago and I had no correspondence from them so rang them and first of all fobbed off by saying they would ring me back they following day as it was 8pm (closing time ) they didn’t ring back…after 4 days I rang and after being on hold for ages I was told they had not received my final gas reading….I have forwarded this reading again then I was told their computer system was playing up! I have given them 14 days to refund my credit….pls guys please beware of gb energy!

Andy Moughtin I have been trying since Tuesday to get through to customer services. I have almost £400 in credit on my account. I am trying to get a refund of this amount. So far I have been on hold for ridiculous amounts of time. Your online messaging system doesn’t appear to work. When I did manage to get to speak to someone I was told your systems were down and to call back later. Due to you huge recent price increases I will be leaving GB energy today. I have lost confidence in GB Energy.

Rank Bajan is it their 2nd Price increase in as many months is a big joke? like the company itself??? i am sure most people who recently joined
GB energy will be moving away as soon as possible as i know i am. I will also contact consumer affairs

Ben Paterson So far I’ve been listening to the horrendous GB energy music for 30minutes… I also received an email today saying my monthly direct debit will change from £57 to £84!!!. I don’t think so!!!!!!

Miranda Halfajob Clarke-semmens Thanks GB Energy, your £21 a month price hike now means that I would have been better off staying with the greedy Big Six!

Mark Naylor Just had a 30% monthly price hike from November 16 with no explanation. Currently into 40th minute on hold to ‘customer services’ to discuss said price hike. Time has been spent productively though- gave me time to change supplier. Dissappointing GB Energy, i had higher expectations.

Chris Pointon I’m considering using Derek Acorah or a ouija board to get in touch with GB since non of the conventional methods seem to be working.

David Far-Char I have started to wonder if their price hike combined with failure to make refunds to customers that leave, is actually a deliberately fraudulent act rather than just total contempt for customers.

Nev George I take it they have given up monitoring this group page, numerous emails sent with no answers, with the amount of outrage on here and on MSE people will be leaving GBenergy supply in their droves, I can see this company going into liquidation overnight in the immediate future so if any have built up a surplus in their account say goodbye to it. Looks like small claims court again.